Power With versus Power Over: Transforming Access to Capital for Women Entrepreneurs

This article is written by Denise Hearn.

The largest year for women founders was 2019, with a combined total $3.35 billion of capital invested in US female founders. While this may sound significant, the industry deployed $136.5 billion last year, making allocations to women less than 2.5% of the industry totals (and, again, this was the best year on record). Unsurprisingly, the data for female founders of color is even more abysmal (see endnotes).

While recent data is disappointing, many will take this as an opportunity to further strengthen their case for Access to Capital for female founders. Unequivocally access to capital is an immediate and urgent need, particularly during the Covid-19 crisis; however, access to capital is insufficient alone to generate the futures we desire.

It is time to look beyond this framing as a silver bullet and instead question the structures and power dynamics which continue to undergird these outcomes. Allocating more money will not fix structural power dynamics which remain unchanged and precipitate the kind of low funding rates we see across venture capital.

Lack of funding is often cited as the predominant reason that initiatives and companies fail to reach viability. While this is partially true, it places too much power in money itself to create generative outcomes. A focus on access to capital alone ignores power dynamics that exist when capital is divorced from discussions of investment terms and accompanying ecosystems of support. This narrative also bolsters existing notions of who holds power, and that financial capital is the predominant source of power.

The Criterion Institute has paved the way in analyzing power dynamics in finance and have created a set of process metrics by which to evaluate power imbalances in funding exchanges. They recommend looking at key areas like timing, transparency, what kind of knowledge is valued in deal-making, risk-sharing, and incentive alignment (among others) to analyze how funding decisions get made.

If we continue to ask the same capital holders for more access to capital without fundamentally challenging entrenched notions of who is ‘worthy’ to receive it, we will continue to spin our wheels. In venture, winner-take-all unicorn models tend to exacerbate power and wealth accumulation. This is why it is critical to build new models that reshape power dynamics instead of replicating more of the same.

We also must consider the terms on which money is distributed, and how the exchange of capital can reshape relationships. Adjusting investment terms and building ecosystems of mutuality are two places where “power over” dynamics can be transformed into “power with.” Only by changing the power dynamics associated with capital will we be successful in transforming the funding landscape.

At SheEO, we are solving for all of these key areas: 1) access to capital, 2) capital on founders’ own terms, and 3) providing ecosystems of support. We ensure women-identifying entrepreneurs have access to regenerative capital to grow their businesses, while also creating an ecosystem of thousands of women globally who will use their products, provide advice and support, and create the relational infrastructure for success.

SheEO has supported 68 ventures over the last five years, with unrestricted regenerative loans that have been gifted into a shared fund by Activators around the world in the spirit of radical generosity. Repayment rates globally are 95%.

Ventures receive a loan that is paid back over a total of five years. This means that 20% of the loan is paid back each year and can be put to work supporting an additional Venture. This creates a perpetual fund with capital that is in constant flow. Our vision is to create the world’s first $1 Billion Perpetual Fund, where capital is recycled to benefit all of humanity, now and for generations to come.

Traditionally, access to capital is determined by gatekeepers — funders, fund managers or venture capitalists who deem themselves ‘experts’ in picking winners. At SheEO, we trust the intuition of thousands of women globally to crowd-source and vote on who receives funding. This is an additional way that we democratize access to capital. We are also in the process of raising a Follow on Fund to support entrepreneurs with additional capital needs past initial seed stage investments.

At SheEO, we employ a completely trust-based funding model, and do not take an equity stake in early stage companies. We also do not place restrictive loan terms on businesses, providing 0% interest loans to support their growth. This allows business owners to utilize funding entirely on their own terms. This is another way that we employ a power with vs. a power over approach, letting businesses themselves decide how to most productively use our investments instead of demanding a seat at the decision-table or demanding we receive a monetary return.

We know that the largest transfer of wealth in history is occurring in the next decade, and women are set to inherit 70% of the Great Wealth Transfer (estimated around $59 trillion). The time is now for women to be empowered in their relationship to wealth, and to commit to stewarding it in service of co-creating a new, more regenerative economy and world. Women are poised to create entire new markets of capital, purchasing power, and most importantly — values that underpin how we think about exchange that demonstrated power with vs. power over dynamics.

At SheEO, we want to put capital to work for businesses creating real value in the world: solving real, global problems while also recognizing the value of our social, cultural, ecological, and spiritual capital that undergird everything else. Access to networks, relationships, and entire ‘markets’ of non-financial capital are critical to an entrepreneur’s success.

One example of how we have built ecosystems of support is the weekly call between SheEO and the Indigenous LIFT Collective. The weekly calls are a place for mutual support, sharing ask/gives, and building at the speed of trust. Together, we co-create the conditions for systems transformation by continuing to learn that we have all that we need, together, and that radical generosity is a practice that deepens with effort and commitment.

When initially brainstorming how to support the Indigenous community of female entrepreneurs, the ideas tended to gravitate to funding pools: creating an Indigenous version of SheEO’s model, or a new fund for Indigenous women. However, recognizing the transformative power of relationships, the first step was setting up weekly circles, getting into relationship with each other, and then widening the circle to include more people. This was key to building the community at the speed of trust.

This kind of ecosystem building results in comments like this from Felicity Chapman, founder of Deadly Weavers: “SheEO has changed my life, allowing me to connect with like-minded social impact driven women from across Australia and the world and building my self-confidence to achieve my business and community goals. Our weekly activator calls allow us to connect, dream big, support each other and drive positive change. SheEO is my superpower.“

Capital is important, but our network of relationships is so much more powerful. When someone asks “what if one of your ventures fails and does not repay the loan?” We respond by saying “then that is a failure of the entire community, not the venture, because we have everything we need to succeed within this network and with each other.”

Everything is relationships at the core — at SheEO, we create the conditions to help women working on the World’s To Do List to become change agents in every aspect of their lives. If we truly want more women to bring their ideas, creativity, and entrepreneurialism to bear in the world — capital alone will be insufficient to get us there.

Denise Hearn is an advisor, author, and speaker who works with organizations, asset managers, and companies who want to use their resources to support a more equitable future. She is co-author of The Myth of Capitalism: Monopolies and the Death of Competition — named one of the Financial Times’ Best Books of 2018. Denise is a thought partner and Activator with SheEO. Engage with her on LinkedIn and Twitter. 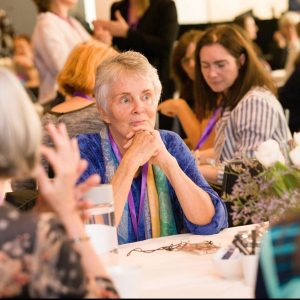 Learning the 4 Energies for Maximum Effectiveness

Written by MJ Ryan, SheEO Development Guide “They are supposed to be our partners but they are going behind our backs to a third party