It’s as if a dam has burst. I’ve spent the past week hearing from AAPI women I know about the racism—verbal and physical harassment, sexual assault, and systemic oppression–they’ve been experiencing their whole lives. From my own nonbinary young adult child adopted from China at age one who is afraid to leave their apartment in the most ethnically diverse and supposedly liberal cities in the U.S.—Oakland, California—which has also been the scene recently of some of the most horrific violence against elderly Asian Americans. Speaking up and speaking out. Speaking their truth, exposing the reality of the lived experience of their lives at the intersection of racism and sexism—according to research from Stop AAPI Hate, 70% of reported incidents of discrimination happen to women or nonbinary folks.

In an article on the Georgia massacre, Georgia State Senator Michelle Au said, “What I’ve heard personally, and what I have felt, is that people sometimes don’t tend to listen to us.” We white people, at the very bare minimum, need to do that. Listen to the pain, rage, grief. Tell them you see them and are prepared to do more. Allow their reality to touch you, to move you into action to do your part to dismantle the poison of white supremacy.

Here is one such voice, one brave woman. I know Suzanne as a Canadian SheEO Venture and Activator, the CEO of Aisle, maker of sustainable period products for every body.  This is a post she recently put on Facebook, which she generously gave permission for me to repost. She gives actions and resources, and I’ve added some as well.

My name is Suzanne Siemens. My Chinese name is Jew Lai Jing.

I come from a family of immigrants who were directly affected by racist legislation called the Chinese Exclusion Act.

And I want to talk about the racism I experience.

Every member of my family has experienced racial prejudice. In the year since the start of the pandemic, there has been a jaw-dropping increase in hate crimes against the Asian community. It breaks my heart.

In 7th grade, a classmate called me a “chink” when we were playing during recess: I was so humiliated I went home, unable to face my classmates for the rest of the day.

I’ve been followed, yelled at, and harassed. I was touched and abused by a medical professional who I trusted.

I’m furious with people who are meant to protect us when they are really only protecting their privilege and scoring points off vulnerable people. Calling COVID-19 “the Chinese virus” or “Kung Flu” is a racist act with consequences for people other than yourself.

Monday’s events in Atlanta are the awful, inevitable conclusion of the racism and prejudice Asian women face. I’m appalled at Asian fetishism and the misogynistic harm that sex workers face. I stand in solidarity with them.

I am standing here today proud to be Chinese. Our differences are to be celebrated. And as the co-founder of Aisle, I proudly celebrate the Asian partners who manufacture our products: CEOs, managers, designers, sewers, factory workers—most of whom are women.

Asian women do SO much in this world. They lead in their communities and work hard both on the front lines and behind the scenes. I’m asking you to stand with them. To protect them. To stop and listen to them. To act.

It is a privilege to not get involved—a privilege that I don’t have. I have to confront racism. I worry for the safety of my mother every day. I’m asking you to stop being a bystander.

Do something that makes you uncomfortable. Call out racism when you see it. Donate to Red Canary Song, National Asian Pacific American Women’s Forum, SWAN Vancouver, and API Equality – Northern California.

Finally, I ask you to honour the fallen and learn how to say their names:

Other resources compiled by the American Friends Service Committee: 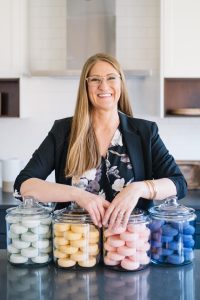