How do we get beyond our Western either/or models of thinking that are destroying the earth to embrace a more accurate view of the world which science now understands to be a complex network of relationships? Dualistic thinking informs everything from our forms of government to the political arguments we have: either your way or my way. It’s hard to even imagine what nondualism in public life looks like.

That’s why I was so interested in a recent post that SheEO activator Joanna Rama shared on Facebook. In it, New Zealand anthropologist, environmentalist and writer Dame Mary Anne Salmond first reveals the profound differences in Māori and Western views of the world and then encourages a way of thinking beyond either/or to create new approaches for Aotearoa-New Zealand. She refers to specific legislative actions, offering us both inside and outside of New Zealand examples of what could be possible. I hope it inspires you as much as it did me:

“For more than 200 years, Māori ways of framing the world and explaining how it works have been regarded as implausible – classified as ‘myths,’ ‘legends,’ ‘superstition’ or ‘religion.’

This has led to difficulties of translation, with terms such as tohunga being translated as ‘priest’ (instead of ‘expert’); atua as ‘god’ (rather than ‘powerful ancestor’ or ‘ancestral force’);’ and tapu as ‘sacred’ (instead of ‘ancestral power’). Whakapapa itself has been translated as ‘genealogy,’ although it is quite different from that idea in English.

“According to the whakapapa taught in the whare wānanga (schools of ancestral learning), a first burst of energy in the cosmos generated thought, memory and desire; followed by knowledge; and aeons of nothingness and darkness. When the winds of life and growth blew through the world, earth and sky emerged, then wind, sea and rivers, plants, animals and people.

“In the spiral of space-time, this process is ongoing, and the whakapapa of life keeps on unfurling. In this framing, the world is an all-encompassing set of kin networks, based on ongoing reciprocal exchanges among different life forms. This is not unlike ideas of complex networks and systems in contemporary science.

“When the first Europeans stepped ashore in Aotearoa, they brought their own mythic framings with them.

“One of these was Cartesian dualism, in which the thinking subject guaranteed its own existence. In this cosmic model, subject was radically divided from object, mind from matter (res cogitans vs res extensa), Culture from Nature, and people from the wider world, and each other.

“In this binary logic, the world was divided into mutually exclusive units – life forms into species and genera through Linnaean taxonomy; people into different categories through censuses and ‘nation states’; human inquiry into different disciplines; and space and time into standardised measures, through instrumentation, the grids of latitude and longitude, surveying, cartography and the like.

“Many of these innovations were happening in Europe in the mid-18th century as the first Europeans arrived in New Zealand, shaping their approaches to landscapes, plants, animals and people in Aotearoa – the origins of our gridded landscapes and bureaucratic systems, for instance.

“In another, closely related if more ancient Western idea, the ‘Great Chain of Being,’ the world was framed as a cosmic hierarchy, with God at the top, followed by archangels and angels, a divine monarch, the ‘civilised’ ranks of the aristocracy, and commoners, with men over women, descending to ‘barbarians’ and ‘savages’, sentient and non-sentient animals, insects, plants, animals and rocks. All forms of life lower down the Chain were expected to offer up obedience and tribute to those higher up.

“This was the origin of the ‘chain of command,’ echoed today in corporates and many other institutions; ‘sovereignty’ (a supreme power derived from a divine monarch); and ranked social systems in which people should know ‘their place’ – sexism, racism, colonisation, the First, Second and Third Worlds, the ‘glass ceiling’, the 1 percent over the 99 percent.

“In this kind of framing, the earth with all its life forms and living systems is at the bottom of the Great Chain of Being, defined as ‘resource’ to be managed for human uses (‘resource management’), offering up ‘ecosystem services’ and so on.

“Again, this cosmic framing has mythic origins, for instance the creation story in Genesis, in which God gives Adam ‘dominion’ over the ‘fish of the sea, and over the fowl of the air, and over the cattle, and over all the earth.’

“It is also non-adaptive. The idea that the world was created for human uses is putting human survival at risk, fueling extractive approaches and climate change, dying rivers, acidifying seas and collapsing ecosystems, in Aotearoa New Zealand as elsewhere.

“Given these challenges, many scientists are now turning to ideas of complex networks and systems to understand how the world works. In Aotearoa, many are experimenting with bringing together mātauranga Māori with cutting edge science, seeking to free their thinking from disciplinary silos by focusing on relations among and between different living systems and life forms.

“Similar efforts are happening in governance, for example. The ‘Wellbeing Budget’ is aimed at achieving better outcomes for people and land in Aotearoa New Zealand, by working across departmental silos.

“The review of the Resource Management Act marks a shift away from the idea of the world as ‘resource’ to be managed for human uses, and towards an idea of te taiao, living systems that include land, waterways, the sea, plants, animals and people.

“Instead of a fundamental split between people and ‘the environment’ based on Cartesian dualism, and top-down extractive approaches based on the old Great Chain of Being, the aim is to understand, work within and regenerate healthy socio-ecosystems.

“Is this also happening in relations between Māori and non- Māori? Over 200 years, Māori have been subjected to gridded systems that cut through whakapapa – dividing up the land into bounded blocks, bought and sold as commodities on the market; and people into lists of owners and tribal groups on a corporate model.

“In the process, they’ve had to grapple with ideas of ‘property’, ‘ownership’, and ‘biculturalism’ based on ‘either/or’ Cartesian logic (Māori vs. non-Māori), even as whakapapa have become ever more complex, wide-ranging and inclusive.

“In New Zealand, it’s vital to recognise the resilience of ancient Western myth models such as Cartesian dualism and the Great Chain of Being in contemporary life, and the dangers associated with these old habits of mind.

“This might also be true of struggles over the ‘ownership’ of ‘resources,’ and radical divisions between Māori vs. non-Māori that cut across whakapapa and whanaungatanga, rather than generating relations based on equality and balanced exchange.

“What would a whakapapa-based approach to Te Tiriti look like, in a country where an increasing number of citizens have whakapapa that include Māori, Pākehā, Pasifika and many other non-Māori forebears and whānaunga?

“Rather than Māori vs non-Māori, could ancestral ideas of lines of descent as strands that remain distinct, while being woven together to create a fine cloak, a meeting-house, a family or a nation, provoke new ways of imagining relations within and among individuals and groups across Aotearoa?

“Is there an opportunity to rethink identity in a whakapapa framing that includes other living systems and life forms – as in the Whanganui River and Urewera Acts, for example? “Would it be possible to bring together ideas of whakapapa and complex systems in designing new institutional forms of order in Aotearoa New Zealand, as well as relations between people and the wider world?” 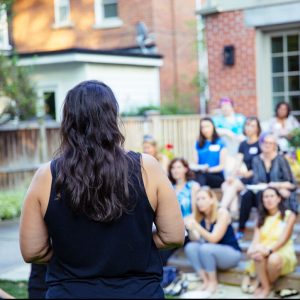 Written by MJ Ryan, SheEO Development Guide One of the topics that comes up the most in my supporting women-led entrepreneurs is self-confidence.  As in,